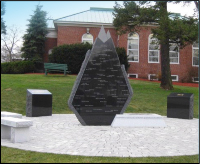 We have often donated time and equipment to local boy scout efforts and most recently provided assistance with the new Iraq Veterans Memorial and rebuilt the parking area for The Upper Room, both of Derry.

The Lannan brothers have also given their personal time to serve on local boards and committees such as the Derry Planning Board and the Derry Economic Development Committee. Other volunteer commitments include numerous hours of coaching local youth athletic teams.

American Excavating is proud to give back to the local communities.

Derry’s Rockingham Road Bridge Completed On Time, Under Budget
Hoyle, Tanner & Associates Inc. recently completed its services for a project to replace the busy Rockingham Road Bridge over Derry’s Beaver Brook. The project started Sept. 3 and was constructed by American Excavating Corp of Derry. The bridge was completed under budget and on time… Read more (PDF) >>

from SeaCoastOnline.com: North Hampton Damaged ‘South Garden’ Back in Bloom
Construction and winter storms damaged the historic “south garden” next to the fish houses this year, but contractors on site at neighboring North Hampton State Beach have helped with repairs in time for the blossoms of summer. Read more (Web) >>

from R. C. Hazelton Co., Inc., Breaking Ground
It wouldn’t be a stretch to say there’s a definite brotherhood associated with American Excavating Corp., and it begins with the men who own the company. Three brothers, David, Tom and Stephen Lannan, founded the business 17 years ago and continue to run the operation today as co-owners. Read more (PDF) >>

from Derry News: Derry Historic Veterans Monument Ready for Unveiling
Last weekend, those driving by MacGregor Park got a sneak peek at the town’s newest monument. For a short time, the shiny 18,000-pound stone was in public view as workers prepared the site around the new structure over the weekend — the first in the nation to honor… Read more (PDF) >>

from Derry News: Londonderry School Projects Ahead of Schedule
Renovations and construction work at the town’s schools are mostly ahead of schedule, according to Facilities Director Chuck Zappala. The largest project this summer will add 40 to 45 additional parking spaces to Londonderry High School’s parking lot. American Excavating, the general contractor… Read more (PDF) >>